Year 6 Victorian Topic – On Wednesday, 4th December Year 6 had a school trip to Eastgate House and the Guildhall Museum in Rochester.  We were there for the morning and we learnt a lot while having a huge amount of fun.  We learnt that there was a picture of Queen Victoria in every school room to pay respect towards her.  To get there and back we had a fun ride on the train, not on the coach like we usually do!  When we were at Eastgate House the choir (Eryn, Ellie, Katie, Charlotte, Mollie, Holly, Brooke, Ava and Isabelle) all sang Child in a Manger Born in front of the fireplace for the school advent calendar.  You can find it on the Miers Court website on Day 6.

We also had pictures taken individually for our Christmas cards and, in one of the classrooms, we saw Victorian desks that you could lift up.  In the desks were ink wells and quills.  In the Guildhall Museum we saw the hulks (boats that would have had prisoners on).  They would send it out to the middle of the river and would treat them very poorly – whip them, feed them horrible food or even make them starve.  They did not have proper beds, they had hammocks that would be uncomfortable and not clean.  The covers would be thin, itchy and even might have holes in.  We really enjoyed the day (mainly having a ride on the train, as we have never been on one with our school and school friends).  We have learnt loads and are looking forward to trips in the future.  Thank you to all of the adults who came along and helped out with the trip.  We really appreciate it as you made the event happen and you made it a whole lot better for us all.

On Thursday, 5th December Year 6 had our Victorian Day.  Some of us dressed up as Victorians so we could play the part.  The teachers were also dressed up and were acting like real Victorian teachers.  All of Year 6 had to play the part and it was really funny.  We were doing the 4Rs – aRithmetic, wRiting, Religion and Reading.  First, we had to choose our Victorian name and then we did the 4Rs.  We weren’t allowed to put our elbows on the table as it was disrespectful and we were not allowed to talk or laugh or cough.  We didn’t use whiteboards, instead we had to use slates and chalk.

We really enjoyed this week as we were able to step back in time to see what it was really like in the Victorian times.  We now appreciate the 21st Century more and our living conditons.

By Ellie, Eryn and Aidan

Year 6 Victorian Day – Year 6 also experienced what it would have been like to have been school children during the Victorian era on their ‘Victorian Day’.  Lessons were very different and the teachers were ever so slightly more strict!  All children chose a Victorian name and practiced the Three Rs – Reading, wRiting and aRithmetic whilst making sure that they were sitting up straight and paying attention at all times!

The children will write a detailed report of their exciting activities for next week’s Miers Court Matters, so watch this space!

Year 6 visit to Eastgate House – Year 6 enjoyed a great day out to Rochester on Wednesday this week where they experienced the sights and sounds of a Victorian Christmas at Eastgate House.  The children explored the food, traditions, decorations and songs that would have been involved and some of them even sang a beautiful Christmas carol by a Victorian fireplace! 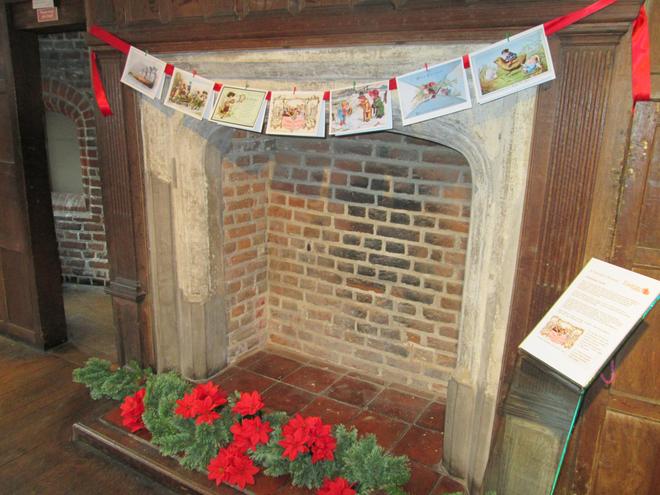 Magistrate Visit - On Tuesday, Richard, our local magistrate, visited our school and spoke to Year 6. He discussed the types of roles you could have in court. The two main courts are the Crown and Magistrate court. The legal advisor gives advice on the law. The magistrate makes the decision on whether or not the victim is guilty. The court ushers tell everyone to stand. In court sessions you have to stand up in respect for the Queen. If you committed a really serious crime you’d be sentenced to the Crown court (which is only 5% of all cases). 95% are sent to the Magistrate court and that’s for the less serious crimes. Did you know you are legally responsible for your behaviour at ten? Did you know 2000 teenagers were imprisoned last year for cyber-bullying? Different punishments for breaking the law are: fines, sentenced to prison for a certain period of time, unpaid work or a conditional discharge. We also did some role play where we took on different roles! It was really interesting meeting him.

By Louisa and Rayhan 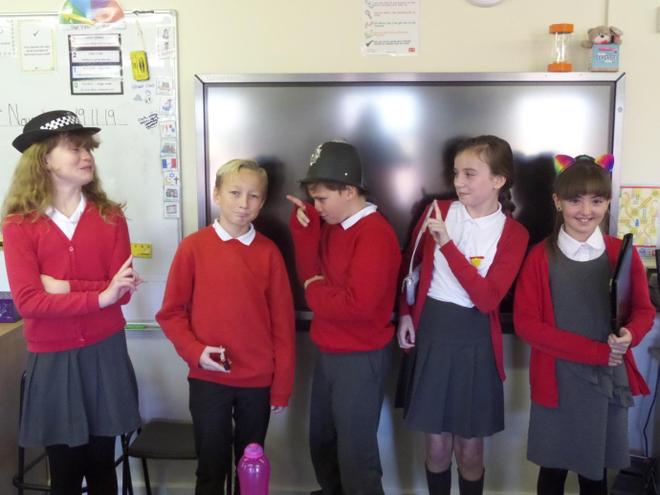 Year 6 Meet the Police! - On Thursday this week  Year 6 had a very enjoyable visit from a police officer named Dan. He is a superintendent with the London Metropolitan police. He told us all about his job, how he started his career and what his role is now. He also told us what equipment is used at a crime scene and why. This was really interesting. Dan also told us all about the different types of fingerprints and we used police equipment to find ours! We all really enjoyed his visit!

By Mollie and Jess.